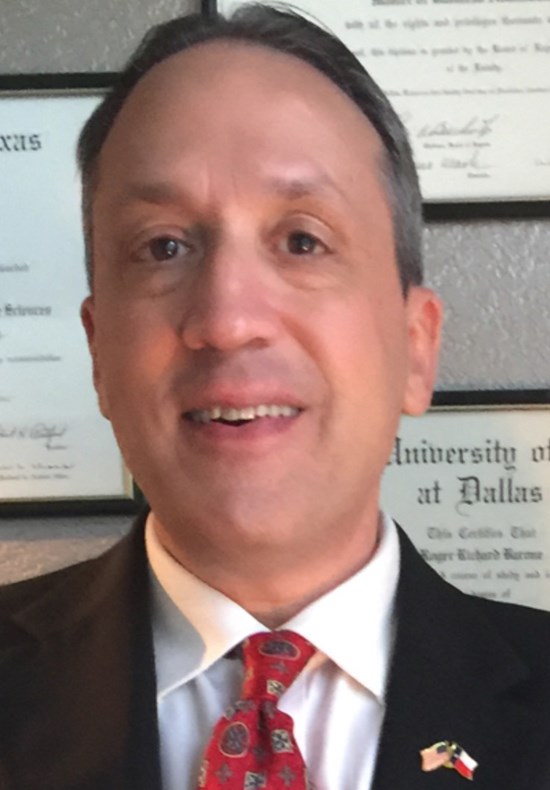 Tired of waiting for "The Swamp" to drain itself.

Fighting for the issues not the office (and love doing so more than sharks love blood).

I was born in and grew up in Manhattan (NY, not Kansas) with a tough ex-Marine (Iwo Jima - purple heart) dad and a much less strict but in many ways tougher loving mom. My dad instilled discipline and responsibility - my mother caring and compassion. My extended family has been involved continuously in politics - with almost never a time without an elected public official in the family (continuing up to today - one cousin was mayor for over 50 years straight!) - for the better part of a century (admittedly only in the NYC metro area).

I moved to Texas in 1984 and lived in Dallas from 1984 until 1989 when I got married and moved to Richardson to live at the first student housing built on the UTD campus where I was attending school, and finally moved to Plano in 1993 and bought our current home there in 1995 and have lived here ever since. I am now not only officially a Texan - having lived here more than half of my life :) - but I am PROUD to say my kids are "pure bred Texans" (with the accent and all - LOL). I love living here. Especially Collin County. It is truly a special unique bastion of what's best about America (except for beaches of course!). I think of no where more than here as home.

1 our trading activity is for our own account and risk and unlike Hedge Funds, CTA's, RIA's, Brokers, Dealers, & Banks, etc., our trading arm has no customers, clients, or investors and DOES NOT manage OPM i.e. "other people's money". Consulting clients have included exchanges, clearinghouses, sovereign and other market participants.

In the past I have owned and operated several businesses including one that I sold in 2004 to spend more time with my young children that operated in ALL 50 states, most territories, and at least 10 foreign countries and had tens of thousands of customers and tens of millions of dollars in transactions. I also later worked directly for a hedge fund after developing a unique custom proprietary strategy for them as a portfolio manager.

The bottom line is that I know how to manage a "chaotic beast" (and have had positions as high as $100M in notional value) with hundreds of moving parts and thrive on challenges and in intensely high stress environments. Just one example is when I took 36 credits in one semester and 40 the next to get my first degree (Assoc., Real Estate) from the DCCCD. I then went to UTD and finished my bachelors degree in three more semesters (the last of which I started my graduate degrees also) and then finished my first Masters and MBA only two more semesters later. Basically I took more than a double load on average. That is the type of thing I thrive on.

Unlike ANY other person identified as a potential candidate (by the Dallas Morning News, e.g.) for this position I am the FIRST (that won't change) and ONLY one (at least for now) that has pledged from DAY ONE to not hold my opponent’s youth and inexperience against them, to not accept one cent as salary if elected (or donate 100% of it to charities my constituents choose - as I believe to truly serve one must seek nor derive ANY personal or family financial benefit), and, more importantly, to ***100%*** FULLY SUPPORT ***BOTH*** President Trump's agenda and campaign promises ***AND*** respect Congressman Sam Johnson's agenda and honor his legacy!

I'm ALSO the only one either not FROM, associated WITH, or with ties TO "The Swamp" and wasn't born with a silver spoon in my mouth and actually EARNED every cent. I've also never moved to different counties just so I could run in an election as a carpet bagger. I also believe I’m the only one that has met and actually worked for President Trump (more than once) going back over 35 (nearly 40) years.

I also believe there are potential candidates for this office that - even though they were elected Republican officials at the time - either DID NOT or chose to NOT endorse President Trump when they had the chance OR endorsed Senator Ted Cruz instead. I believe it is imperative that we elect someone whose ACTUAL HEART is 100% behind our CURRENT PRESIDENT! Furthermore, I believe I am FAR MORE representative of the average Collin County voter than some others that might eventually seek this office (so far though, only 2 candidate have identified themselves officially: Adam Bell, Democrat and Robert Mason, Humane Party)

As a businessman and trader I have always embraced what was most expeditious and logical and looked to cut through or eliminate red tape and bureaucracy every chance I got. I owe NO ONE ANYTHING politically and am neither owned by nor beholden to ANY special interests. Nor do I seek an office to increase my family's wealth, influence, power, or stature.

Our next Representative, instead of another career politician, should instead be one who knows what it is like to be a regular citizen and businesperson having to deal with crushing government over reach, mountains of bureaucracy, piles of needless red tape, and job and opportunity killing regulations. My litmus test will be "if it doesn't help people earn more money OR save money OR improve the quality of their lives (including making them safer) - WITH THEIR FULL AGREEMENT - then it is probably not a good idea."

I am a believer in the 11th commandment (for those that do also) and pledge to support whoever is the eventual Republican nominee for this position.

Thank you for signing up!